SZA Defends TDE’s Punch After Calling Out Her Label: “He Really Fights For Me”

SZA fervently defends Punch after calling out her label this week.

SZA has a long history of being displeased with her record label, often using her social media platforms to call out the behind-the-scenes drama. After her hit record “Good Days” fell out of the Billboard Hot 100’s top ten, the singer took to the comments section to air out her issues once again.”I hate my label. So much,” she wrote on a fan’s Instagram page. As people generally do, fans began to speculate that SZA was angry with Punch and Top Dawg Entertainment. However, as she clarified this morning, her message was not aimed at Punch in the slightest. 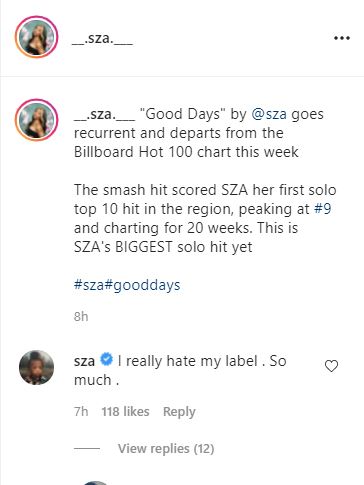 “Punch is my manager (not a machine or a label),” she wrote on Twitter. “Also been like my stage dad the last 10 yrs. Be nice to him pls [pleading face emoji]. He really fights for me. Not angry w him. Or anybody really. Jus my own choices.”

She took the next few moments to respond to fans, replying to one person who asked for the official release of her highly-anticipated single “Shirt.” “Lmao now THAT. Needs to happen. also isn’t on [Punch],” said SZA.

She also said that moving forward, she will be clearer when making these kinds of posts about her label. When someone asked if Punch manipulates or threatens her, she fervently defended the music executive. “Lmao no y’all just always assume he’s the man behind the curtain I gotta start saying ‘but not punch n nem,'” explained the singer.

#VA we’re LIVE in the crib for @dacribbshow with

@iamcardib was living her best life celebrating he

@summerwalker is about to make a special announcem

Congrats to @iamcardib and @theestallion for winni

Congratulations to @feliciathegoat on winning albu

Give it up for the Best New Hip Hop Artist, @bleuv

One of the biggest nights in #HipHop kicks off ton

Dr. Prenik James Presents: Taking You Back To Your

Kim Kardashian took to Twitter where she shared what appeared to be a track-list for a project titled,  Jesus Is King.