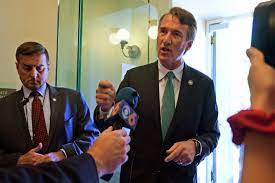 At appearances in Richmond on Thursday, Gov. Glenn Youngkin pivoted when asked about a comparison to Russian President Vladimir Putin and laid out the path forward for a controversial cannabis bill. He also discussed the next steps for his gas tax holiday proposal after a Senate panel rejected the idea.

The reaction comes after the General Assembly convened for a one-day session on Wednesday to act on Youngkin’s 26 vetoes and more than 100 amendments.

In one of the most heated debates of the day, Delegate Marcus Simon (D-Fairfax) called Youngkin’s push to force the embroiled Loudoun County School Board to run for re-election early undemocratic and unconstitutional. The locality has become a flashpoint in conservative politics due to controversies over critical race theory and student sexual assaults.

“Vladimir Putin can dissolve the city council and have a new mayor elected but that’s not how we do it in democracies,” Simon said.

The amendment was approved on a party-line vote in the Republican-controlled House of Delegates before being killed in the Democrat-led Senate.

Asked to respond to the Putin comparison, Youngkin deflected.

“There are a lot of things we pay attention to and other things we don’t,” Youngkin said. “I have to say we have been so focused on working for Virginians over the past one hundred days.”

Overall, Youngkin said he was pleased with the General Assembly’s work on Wednesday, noting that all of his vetoes were sustained. The results of his amendments were mixed.

Using an unusual procedural maneuver, the Senate effectively killed an amended bill that sought to create new misdemeanor penalties for marijuana possession starting at two ounces, according to several lawmakers.

Despite the setback, Youngkin said his administration’s work on the bill is not done.

“There is a collaborative way for the Senate and the House to get this done with our support. We can end up with a bill that reflects the agreements that were struck yesterday,” Youngkin said.

Youngkin said the General Assembly could revisit the bill in committee without any action on his part.

However, Senator Barbara Favola (D-Arlington), who chairs the Senate Rehabilitation and Social Services Committee, said Youngkin would need to send down a new bill to revive the effort. She hopes to hold a committee meeting on it as early as next month, when some expect lawmakers to return to act on the unfinished budget.

Favola said another option would be passing temporary consumer protection measures using the budget as a vehicle.

“We would’ve had the votes if it weren’t for the criminal penalties on marijuana so we need to do some fine tuning there,” Hanger said.

Hanger said it was also difficult to “thread the needle” between those who felt the amended bill didn’t do enough to restrict the largely unregulated hemp industry and those who worried it went too far.

“I’m not sure what the right fix is. There is certainly an expansive use of synthetics in the market that need to be controlled,” Senator Jeremy McPike (D-Prince William) said. “Certainly, the intent is not to put CBD stores out of business.”

Youngkin also weighed in on the next steps for his proposed gas tax holiday after the Senate Finance and Appropriations Committee rejected a legislative approach on Wednesday. Opponents raised concerns about hurting funding for road repairs.

“It’s Virginians’ money, not the governments and I’m very disappointed that the Democrats in Virginia are unfortunately focusing more on politics than they are at serving Virginians here,” Youngkin said.

Youngkin said Republicans will still try to negotiate a gas tax suspension into the budget.

If it makes the cut, it would mean the proposal couldn’t take effect in May as Youngkin had hoped, according to Jacqueline Woodbridge, a spokesperson for Senate Democrats. Woodbridge said the earliest it could take effect is July 1st but even that looks like an uphill battle.

Camaryn Swanson Reveals Why She Pressed Charges Against Tyga

She claims “someone” forced her hand after they gave “fake news” to TMZ. It has been a hectic week for Tyga after his ex-girlfriend, Camaryn Swanson, came ...