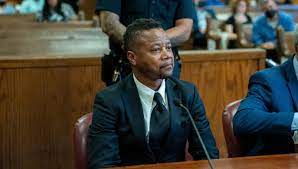 Cuba Gooding Jr. will avoid jail time in his sexual abuse case. In June 2019, the 54-year old actor was arrested after waitress Kelsey Harbert told police that he groped her at a rooftop bar in New York. During a court hearing in April, Gooding admitted to kissing the woman on her lips without consent. He also admitted to two other incidents of non-consensual contact in October 2018 and June 2019.

The Gladiator actor ultimately plead guilty to a misdemeanor charge of forcibly touching the young women. Under the terms of the plea, Gooding was to continue alcohol and behavior modification treatment for six months and have no new arrests. If the terms were abided by, Gooding would be allowed to re-plea to a lesser charge and face a sentence to time served.

On Wednesday, he did just that in a New York City court, allowing him to avoid jail time. Accusers were in attendance during the recent hearing, however they didn’t interact with the actor. “There was no need to further address them today,” defense attorney Frank Rothman stated. “He apologized the day he plead guilty.”

But victim Kelsey Harbert was not pleased with the ruling. She and her lawyer Gloria Allred believes it is too soft an agreement for Gooding. “The message he got today is that because of who he is the rules are different for him, Harbert told reporters.

Chaka Say’s “I’m not gone do no song with no heffa.”