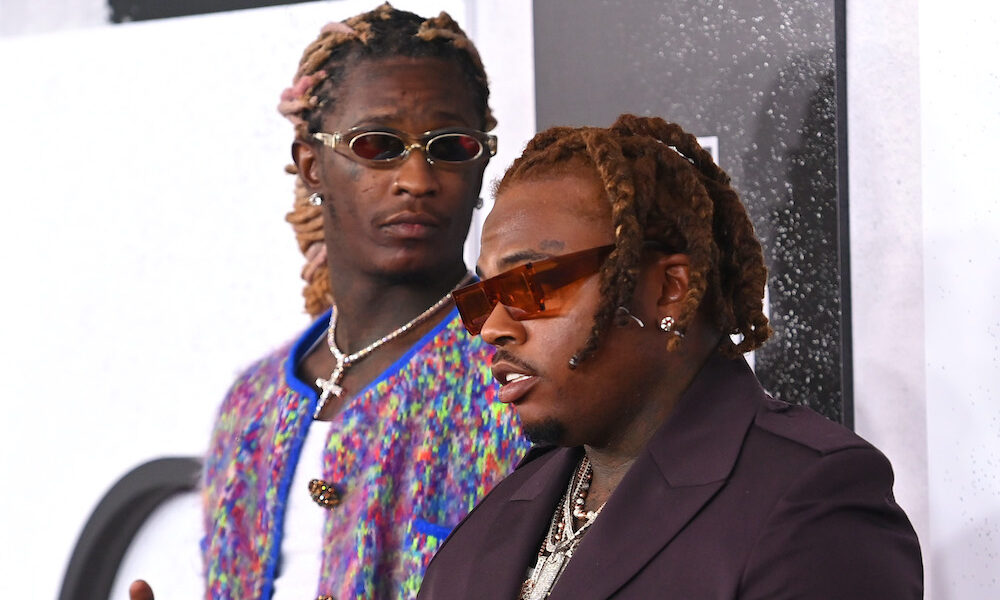 Atlanta rapper Gunna has been released from jail after he pleaded guilty to a racketeering conspiracy charge in a sweeping gang indictment against him, rapper Young Thug and several other alleged members of the Young Slime Life criminal street gang.

Reporter Mark Winne was the only television journalist in the courtroom Wednesday as Gunna, whose real name is Sergio Kitchens, faced a judge.

The rapper entered a negotiated plea, known as an Alford plea, in which a defendant doesn’t admit he committed the crime, but acknowledges that it is in his best interest to plead guilty. The charge Gunna faced was one count of conspiracy to violate the Racketeer Influenced and Corruption Act.

Gunna was sentenced to five years with one served in prison. The one-year sentence was commuted to time served. The four-year remaining balance on his sentence has been suspended and will be subject to special conditions including 500 hours of community service.

After the sentence came down, the rapper released a statement, saying:

“While I have agreed to always be truthful, I want to make it perfectly clear that I have NOT made any statements, have NOT been interviewed, have NOT cooperated, have NOT agreed to testify or be a witness for or against any party in the case and have absolutely NO intention of being involved in the trial process in any way.”

Despite saying that he will not testify, it is a condition of Gunna’s trial that he testifies if he is called, though he can claim the Fifth Amendment.

Gunna, Young Thug and 26 others were arrested in May in a sweeping gang indictment that claimed YSL is a violent criminal street gang that has committed multiple murders, shootings and carjackings over the course of a decade. Prosecutors said that the rappers promoted the gang’s activities in songs and on social media.

In his statement Wednesday, Gunna said that when he joined YSL in 2016, he didn’t consider it a gang, but “more like a group of people from metro Atlanta who had common interests and artistic aspirations. My focus of YSL was entertainment — rap artists who wrote and performed music that exaggerated and ‘glorified’ urban life in the Black community.”

Gunna said he cherishes his association with YSL music and always will.

During Gunna’s court appearance Wednesday, the judge read out the stipulations of the plea agreement that Gunna then responded to.

The rapper swore that he has personal knowledge that members or associates of YSL have committed crimes in furtherance of the gang — but seemed to distance himself from “YSL the gang” versus “YSL the label.”

“I recognize, accept and deeply regret that my talent and music indirectly furthered YSL the gang to the detriment of my community,” Gunna acknowledged on the signed statement. “YSL as a gang must end.”

Gunna also attested in the plea deal that he was in a car with Young Thug, whose real name is Jeffrey Williams, when officers pulled them over and found hydrocodone, methamphetamine and a firearm inside. According to the plea agreement, Gunn claimed the gun and drugs weren’t his. It’s unclear if anyone else was in the car at the time.

Per the plea agreement, the rapper will have to perform 500 hours of community service, a substantial portion of which will require him to speak to young people about the hazards and immorality of gangs and gang violence.

He is also not allowed to carry a gun during the term of his sentence. If he violates the terms of the plea agreement, the district attorney has the right to revoke his suspended sentence.

Alleged YSL co-founder Walter Murphy also negotiated a plea deal in the indictment on Tuesday, according to his lawyer, Jacoby Hudson.

Hudson said Murphy has already been released and that he will not testify about the conduct of any other individual defendants. Hudson said the ways that Murphy has changed his life since he got out of prison was a major factor in the deal.

Young Thug remains in jail. His trial is set to start in January.

According to CNN: Former Presidents Barack Obama, George W. Bush and Bill Clinton are volunteering to get their Covid-19 vaccines on camera to promote public ...